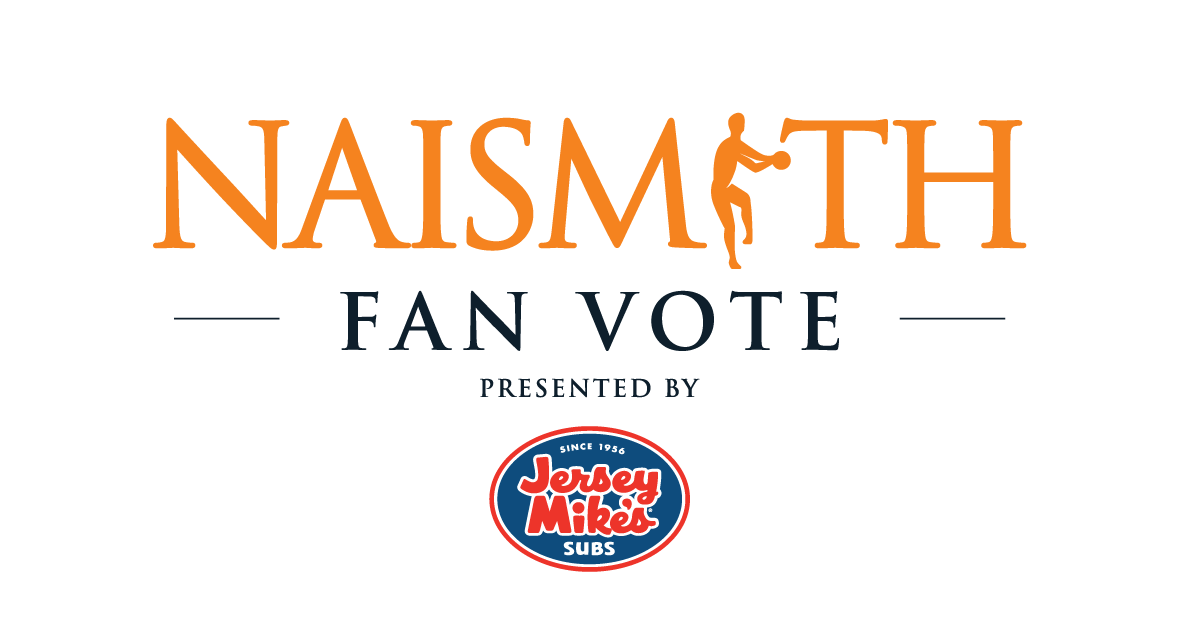 RULE 1. ELIGIBILITY AND HOW TO VOTE
NO PURCHASE NECESSARY. To vote, visit naismithfanvote.com and follow the online instructions for entering. You may also vote on Twitter by visiting the @NaismithTrophy page.  Voting begins at 2:00 PM (EDT) on March 22, 2022 and ends at 6:00PM (EDT) on March 29, 2022. Voting a) is limited to one (1) vote per day per person per unique login via email; and b) is open to international voting.

RULE 2. NO PRIZES
No prizes will be awarded to voters.

Jersey Mike’s Naismith Trophy College Player of the Year and Werner Ladder College Coach of the Year are limited to those candidates that have been determined “Naismith Award National Finalists” by the Atlanta Tipoff Club (ATOC), administrators of the Naismith Awards.

RULE 4. VOTING RESULTS
Voting ends at 6:00PM (EDT) on March 29, 2022. The name of the Men’s and Women’s College Coach and Men’s and Women’s College Player with the most votes will account for 5% of the overall vote. Results of the fan vote will be tabulated and certified by Aprio, a premier CPA-led business advisory firm, headquartered in Atlanta.

CAUTION – ANY ATTEMPT TO DELIBERATELY DAMAGE THE WEBSITE OR UNDERMINE THE LEGITIMATE OPERATION OF THE WEBSITE OF VOTING MAY BE IN VIOLATION OF CRIMINAL AND CIVIL LAWS. SHOULD SUCH AN ATTEMPT BE MADE, THE ATLANTA TIPOFF CLUB RESERVES THE RIGHT TO SEEK ALL AVAILABLE REMEDIES AND DAMAGES (INCLUDING DAMAGES, ATTORNEY’S FEES, AS APPROPRIATE) FROM ANY SUCH ENTRANT TO THE FULLEST EXTENT OF THE LAW.